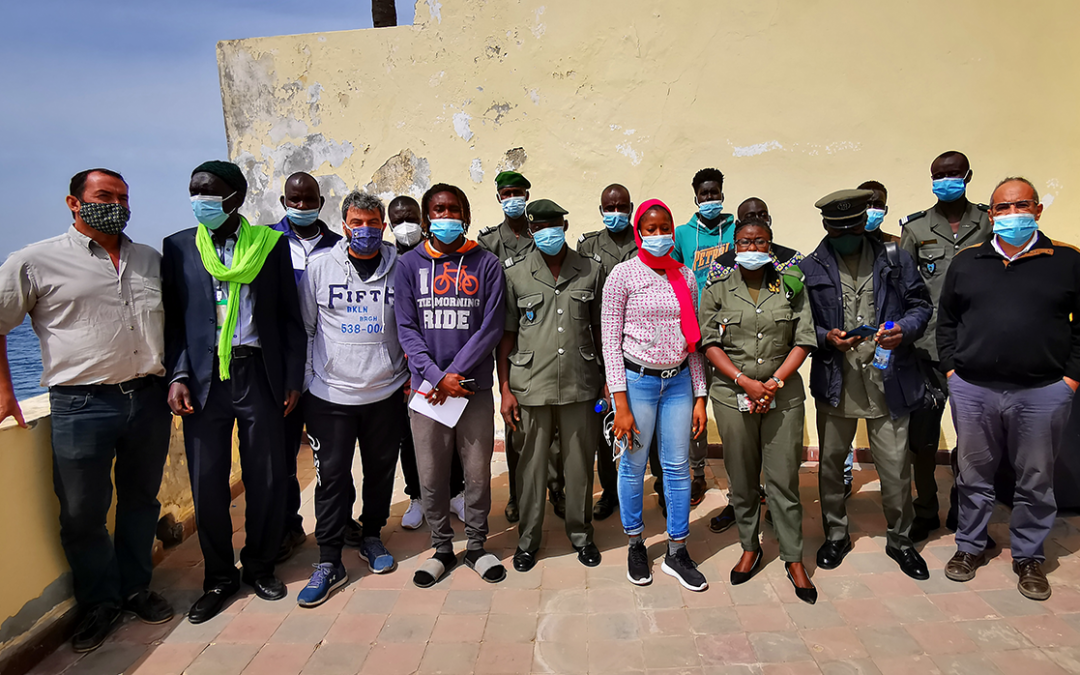 As part of the process of disseminating the tools developed by the Resilience Twinning and provide training to MPA managers, a collaboration has been initiated with the Senegal national parks authority (DPN) and the Directorate of community marine protected areas (Direction des aires marines communautaires protégées, DAMCP). This collaboration aims in particular to apply the Resilience Self-Assessment (R-SAT) tool to assess the MPAs’ capacities in different contexts.

A first coaching session took place in December 2020 with a team from the National Park of the Madeleine Islands in Dakar. This MPA is the closest national park to the Senegalese capital and represents a showcase of the national marine conservation policy. It is visited daily by tourists and is situated in a location busy with passing fishing vessels and ships.

A second session was organised on the island of Gorée, a World Heritage Site for its role as the largest slave-trading centre on the African coast, in February 2021 with the team of this community marine protected area, the chief monitoring and evaluation officer of DAMCP, as well as various stakeholders (fishermen, environmental association, Gorée local authority and others). Sixteen people attended the meeting, which was hosted in the town hall and organised by the national authority. The tiny island of Gorée is a historic site that faces many threats due to its location close to the entrance to Dakar’s main port.

Sessions with other MPAs are scheduled until June 2021, as well as with the member MPAs of the West African regional MPA network (RAMPAO).

The topic of coastal resilience has gained a new impetus in Senegal, with a number of ongoing projects (on coastal legislation, an integrated coastal zone management (ICZM) strategy, MPAs and mangroves, etc.). The Government of Senegal has proposed an IUCN Resolution (on resilience), prepared with the contribution of this project’s Resilience Twinning and the support of 22 South African sponsors from 8 different IUCN geographical regions. 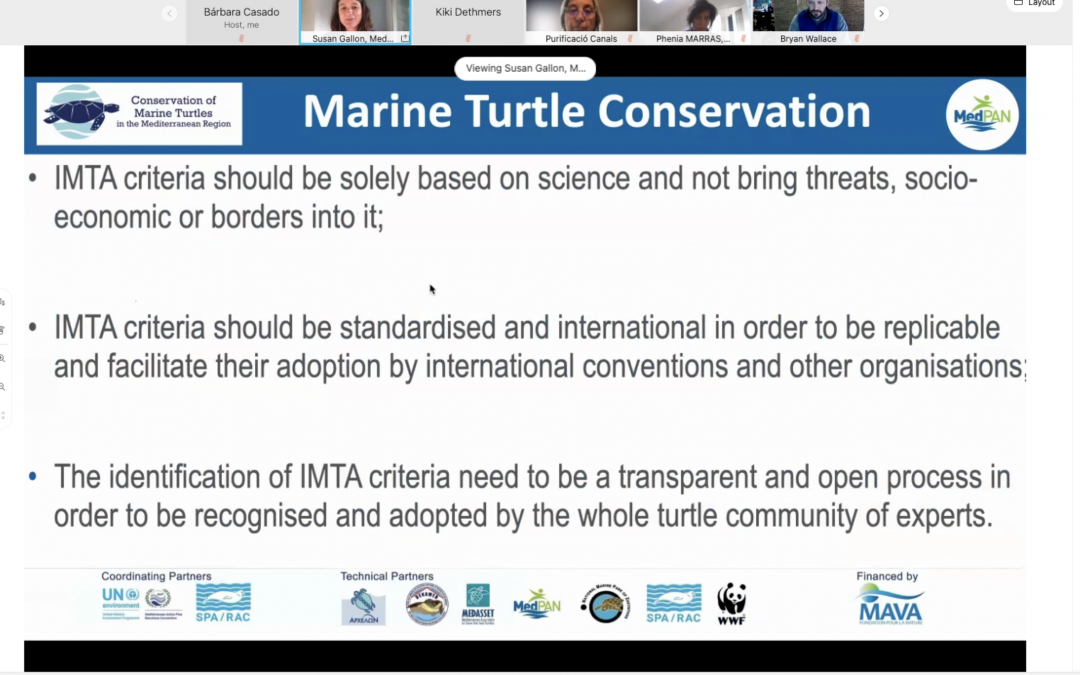 Webinar on marine turtles: joint presentation on the progress of global and standardized criteria

The week of 8-11 March 2021, the Ocean Governance project hosted 3 webinars (in English, French and Spanish) on the topic of marine turtles. The webinars covered two main topics: the progress of the IUCN Species Survival Commission (SSC Marine) Turtle Specialist Group on the development of global and standardised criteria for Important Marine Turtle Areas (IMTA); and the results of the Study on Marine Turtles and Regional Seas Convention implemented by the French Office for Biodiversity (OFB).

The webinars were co-hosted by the French Office for Biodiversity and Mediterranean Protected Areas Network (MedPAN), with the support of the members of the IUCN SSC Marine Turtle Specialist Group. The event started with an introduction to the Ocean Governance Project and its objectives (given by its Team Leader, Puri Canals), including this activity which responds to the role of MPAs networks of managers in addressing marine turtles, and their habitats, conservation and management with MPAs. Presentations were given by Susan Gallon and Fréderic Ducarme from MedPAN (on conservation of marine turtles in the Mediterranean region and the development of an IMTA), Bryan Wallace and Roderic Mast from the IUCN-SSC Marine Turtle Specialist Group on the development of IMTAs, and Phénia Marras and Dimitri Medetian from OFB on marine turtles in Regional Seas Conventions.

With around 100 people in total attending the 3 webinars, one curiosity of the discussion was that Q&A topics were noticeably different in each of the 3 language webinars, due partly to the particularities of each region. The webinars are available here in English, Spanish and French. 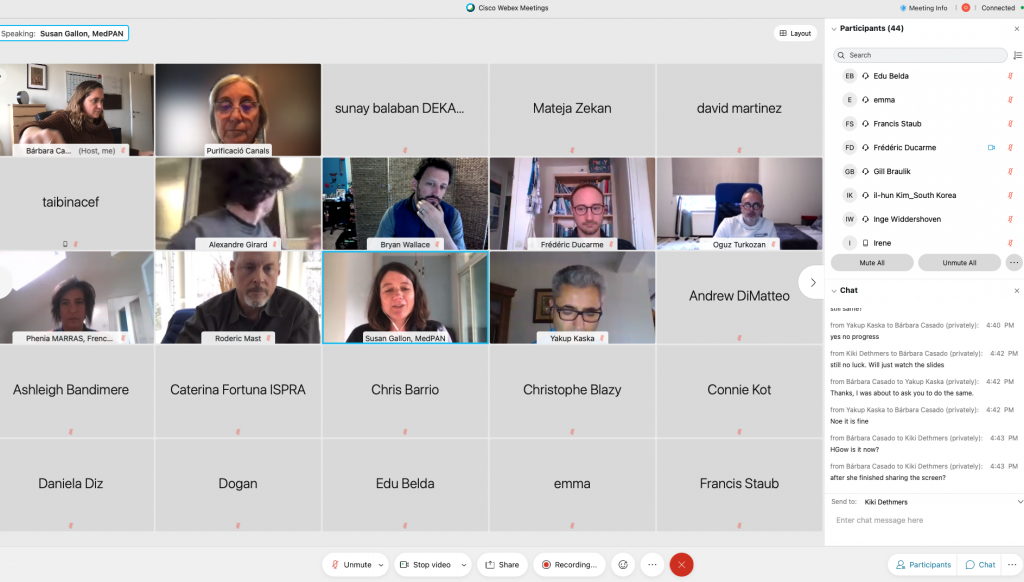 In February 2021, the European Union joined the International Coral Reef Initiative (ICRI), a global partnership to protect the world’s coral reefs and associated ecosystems. Representing the EU at the ICRI general assembly, the European Commissioner for Environment, Oceans and Fisheries, Virginijus Sinkevičius, said: “Coral reefs are emblematic of rich marine life. Yet, the rapid degradation of these beautiful underwater worlds is also a very stark reminder of the pressures that human activity puts on our planet, not least our oceans. The protection of these vital marine ecosystems is of great importance to biodiversity, sustainable food supply and the global climate system.” In 2020, the EU proposed a Biodiversity Strategy for 2021-2030, which includes the aim to strengthen the protection of marine ecosystems and restore them to a “good environmental status”.

A new guide has been published to help experts decide whether coral reef restoration is an effective strategy for the long-term protection of coral reefs locally, regionally and globally. Coral reefs are valuable ecosystems, supporting a rich and abundant marine biodiversity. However, they are highly sensitive and vulnerable to climate change: as many as 50% are estimated to have been lost due to ocean warming. There is thus both a greater urgency to protect reefs and mitigate against climate change, and a need to restore damaged reef systems. The report, Coral reef restoration as a strategy to improve ecosystem services, produced by the United Nations Environment Programme (UNEP) and the International Coral Reef Initiative (ICRI), offers guidance for practitioners, managers, and decision-makers on the need to carefully plan, fund and manage reef restoration to ensure long-term sustainability and success.